Enabling a real-time functionality is one of the real challenges for developers. The developer community has come a long way from HTTP polling to AJAX and has finally come up a solution for building a truly real-time app.

This solution comes in the form of Websockets, which makes it possible for developers to open up an interactive session between a user's browser and a server. Websockets allows to send and receive messages to a server, making a server to generate event-driven responses without having to poll the server for reply.

Nowadays, Websockets are one of the best solution for creating real-time applications, such as multiplayer online games, instant messengers, tracking apps etc. WebSockets are a communications protocol that use full-duplex communication channels over a single durable Transmission Control Protocol (TCP) connection. 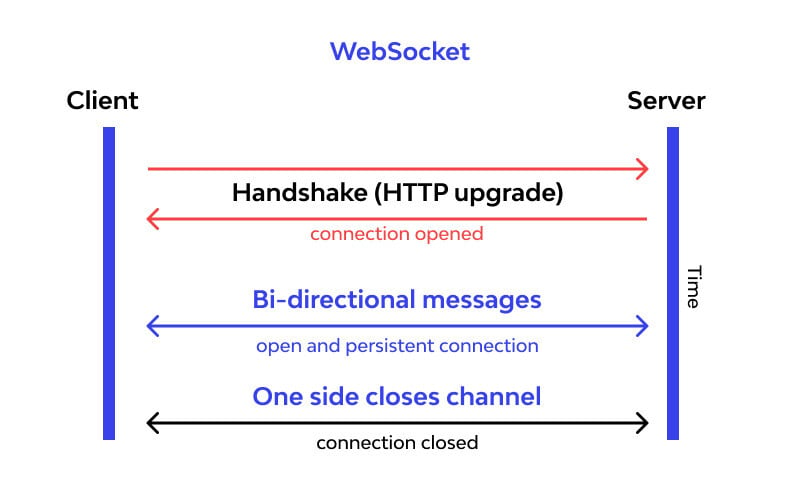 With less overhead, WebSockets enable real-time communication and rapid data transferring between the web server and the web browser or client application. WebSocket communication initiates a handshake, which uses the HTTP Upgrade() header to change from the HTTP protocol to the WebSocket protocol.

Data can be transferred from the server without a prior request from the client, allowing messages to be passed back and forth and keeping the connection open until the client or server kills it. Thus, a two-way real-time data transfer can take place between the client and the server. WebSocket communications are usually done via TCP port number 443.

In this section, we will be implementing a basic messaging server in Golang

Setting up the HTTP server

Since websockets are built on top of HTTP, our first step would be creating a basic HTTP server that can accept client connections and serve messages. Below is basic http based server written in Golang using library github.com/go-chi/chi

To set up a WebSocket connection, a one-time handshake is required between the client and the server. A handshake uses the Upgrade() method to upgrade the HTTP server connection to the WebSocket protocol. Golang provides multiple libraries like gorilla/websockets (high level, little complexity), gobwas/ws (low level, higher complexity), epoll + gobwas`` if you want to trade even more complexity for significant resource savings. For the sake of simplicity, we will be usinggithub.com/gorilla/websocket```

Below is the function implementation for Upgrade() for library github.com/gorilla/websocket

Below is the output from the postman:

Most of the novice developers, often gets confused between these two concept. Although both of these concepts are often used when we are taking about server-server or server-client communications, they couldn't be more different. WebSockets as a transportation method, like a plane. It solves the problem of getting the client and server to talk in real-time (e.g. chat applications, notifications, etc). There are other methods like long-short polling (bus), or server-sent events (train). PubSub is a design pattern on how pieces of a system communicate. It's like the subway/airplane system (think JetBlue, Delta Airlines, NYC Subway System, etc). Common tools to handle PubSub today are Kafka and Redis. Some Backend engineers can build an entire career out of designing well-architected, reliable PubSub systems. It can be a very difficult problem.

WebSockets’ primary purpose is to support full-duplex, or two-way communication. Currently, WebSockets offers cross-platform support for Android, iOS, web, and desktop applications, and WebSockets are commonly used in the following types of applications:

In this blog, we explored Websockets with its brief introduction and their working. To get the better understanding of how websockets work in golang we have implemented a simple messaging app to send and receive data between server and user browser. For our next blog, we will be implementing a chatting service using websockets.